You are here: Home1 / Awards & Honors

Randall has enjoyed tremendous accolades for his work from numerous organizations throughout his career. His earliest musical recognitions came in winning or placing in numerous talent or fiddle contests around the South. 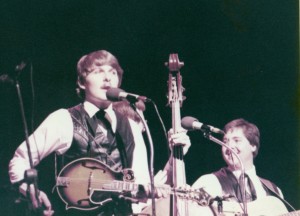 With his youth bluegrass band the Peachtree Pickers, he won the Georgia State Bluegrass Band of the Year in 1985. During this same period he found himself in a heated battle for Mandolin Player of the Year missing the title by a fraction of a point.

Of course, he already had several fiddle titles under his belt and continued his rise in the industry even competing at the Grand Master Fiddler Championship. He also enjoyed sharing numerous nominations for industry awards during this period.

As he embarked on his solo career, he enjoyed successes in the fields of bluegrass, gospel and country music including a top country vocal collaboration with Grand Ole Opry stars The Whites. 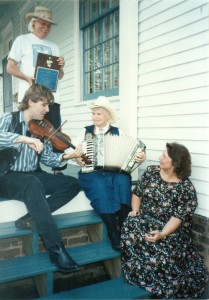 His “Handshakes and Smiles” release became a top-20 Christian music seller in 1990. His Christmas release “Christmas Time’s A Comin’” was a top Southern seller in 1991 and 1992.

His recordings are among the top thirty lists of bluegrass or gospel recordings for their respective years.

He received his own Georgia Music Hall of Fame exhibit in 1996 at the opening of the museum; was honored for his contributions to the music of Bill Monroe by the state of Kentucky in 2002; was named the Appalachian Ambassador of the Fiddle in 2004; and inducted in the Atlanta Country Music Hall of Fame in 2004. 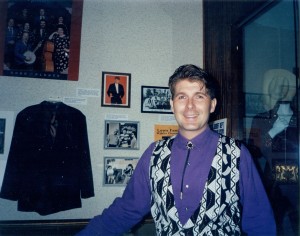 In his first year of journalism in 2001, the Georgia Press Association awarded him a First Place Feature Photo award for a unique photo of the Bluegrass group The White Oak Mountain Boys. His writing has yielded 21 state and national press awards; one among those is W. Trox Bankston Award. He helped garner two W. G. Sutlive trophies for community service and assisted in achieving the General Excellence Award in 2003 and 2004. 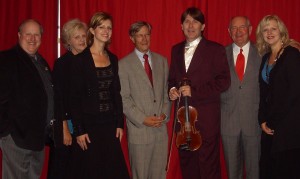 Randall Franks is honored by the ARC Chairman (fourth from left) and Georgia Gov. Sonny Perdue (second from right) at his appearance for the Appalachian Regional Commission with his guests the Watkins Family. (Randall Franks Media)

He received the Little Jimmy Dempsey Musician Award (2006); and his own exhibit in the Rhea County Scopes Trial Museum (2007).

He received a Songwriter of the Year Award in 2009 for his song “Old Black Fiddle.”

He became the first bluegrass artist to appear on the Georgia Music Hall of Fame Awards since 1992 on Georgia Public Television while leading the Georgia Mafia Bluegrass Band to honor Johnny Carson in 2009. 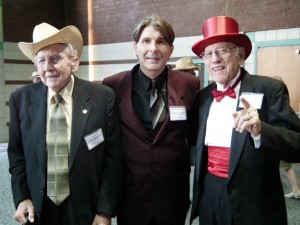 Randall was honored by the Appalachian Regional Commission in 2010 for his contributions representing the music of the Southern Appalachians. 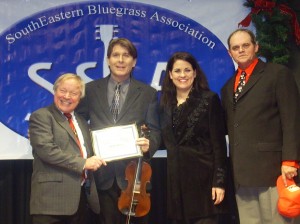 He was awarded the Legends Award from the Carolinas Country-Bluegrass-Gospel Hall of Fame in 2010 and designated its Appalachian Ambassador of the Fiddle.

He was also honored by the SouthEastern Bluegrass Association with a special Founder’s Award in 2010.

Randall was inducted into the Independent Country Music Hall of Fame in 2013. 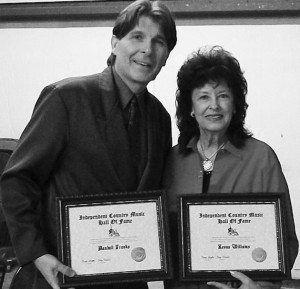 Randall Franks and country singer Leona Williams are among the Independent Country Music Hall of Fame inductees in Nashville for 2013. (Randall Franks Media)

Georgia Governor Nathan Deal honored Randall for his contributions to the state of Georgia and its residents in 2013 and he also received the Kiwanis Distinguished Achievement Award in 2013. 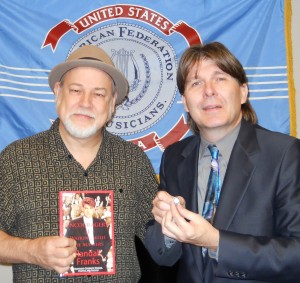 In 2020, Randall was chosen as the first recipient of the AirPlay Direct Evolution Grant. He was inducted in the Chamber Business Person Hall of Fame by the Catoosa County Chamber President Amy Jackson. Also, he was honored as Catoosa County Patriotic Citizen of the Year by the Catoosa and Walker Veterans and Citizens Memorial Committee.