You are here: Home1 / Comedy 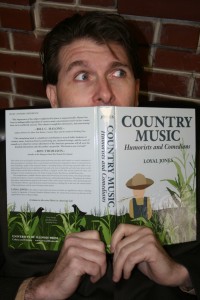 Actor/ Entertainer Randall Franks began his comedy career through his work with his childhood bluegrass and gospel group The Peachtree Pickers in Chamblee, Ga. 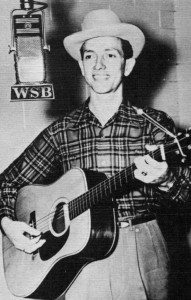 Cotton Carrier as heard on WSB.

“I remember the first time I realized I could make people laugh,” he said. “We were performing at Everett’s Bluegrass Barn in Suwannee, Georgia. Just before we went on my glasses fell into the sink and broke. Without my glasses, I am blind as a bat. I couldn’t see my set list, I couldn’t see how to put the capo on the guitar, and I couldn’t see the faces of the audience. So I began playing the vision problem and throwing out every country joke I knew, the audience rolled in the aisles with laughter. I knew then that I wanted to make people laugh whenever I went on stage.”

Franks carried his comedy along with his group to appearances for the Grand Ole Opry and a regular role in the early cable series “The Country Kids TV Series,” a children’s “Hee Haw” filmed in Dallas, Texas

Franks strengthened his talents under the tutorage of the late Georgia Music Hall of Fame member Cotton Carrier, 1940s host of the WSB Barndance in Atlanta, and under the late Doodle Thrower of Tallapoosa, Ga. Franks often made appearances with Carrier and his wife Jane learning from his polished country comedy with which he made millions laugh on Saturday nights.

“I still have his typed joke book that he used on radio,” he said. “There are some wonderful routines in there, unfortunately the audience’s tastes have left much of the old country comedy behind.”

Doodle Thrower was a mechanic by trade but to thousands he was the guy in overalls and funny leather hat that played the harmonica. He was highlighted by Alan Lomax in his PBS documentary “Appalachian Journey” Thrower made thousands laugh on stages from the National Folk Festival to the 1982 World’s Fair in Knoxville, Tenn. with his band The Golden River Grass. Franks began working with Doodle sharing the stage as fiddle player and often serving as straight man for some of Doodle’s routines in 1984 following a run as a member of Bill Monroe’s Blue Grass Boys.

“Some of my favorite memories are when I could turn the tables on Doodle and make him play straight to my comedic lines,” he said. “I watched him put crowds of any size or any socio-economic background in the palm of his hands and make them laugh, cry or simply come to the feet in elation. I learned a lot about comedy from him.” 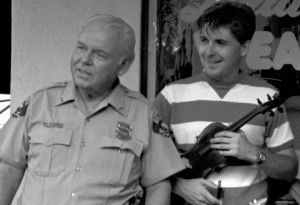 Franks went on to feature comedy as a regular part of his solo act as he established himself as an actor and entertainer in his own right. After appearances in film beginning with the 1988 TV movie “Desperate For Love” with Christian Slater, he landed a role as “Officer Randy Goode” in the TV series “In the Heat of the Night” working alongside TV comedy legend Carroll O’Connor, “Archie Bunker” from “All in the Family.”

“I learned everyday from watching him how to get a line across to the television audience, whether it was serious or funny,” he said. “I was blessed to learn from one of the best there ever will be in the comedy business. He understood how to make a character work and I am thankful he shared that with me.”

Randall continued adding jokes to his stage shows and as he became a top selling Christian artist in 1990 with his release “Handshakes and Smiles,” he became bluegrass music’s first solo crossover artist into mainstream Christian music. 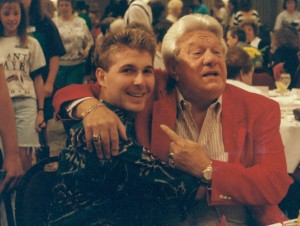 On the bluegrass side, he kept a steady stream of fiddle albums feeding into the genre. He hosted the SPBGMA Bluegrass Music Awards in Nashville, Tenn. in 1995 and continued making appearances for the Grand Ole Opry. In 1996 he added comedy to his recordings with his “Tunes and Tales from Tunnel Hill” release adding to his list of titles in numerous publications — humorist.

Appalachian scholar Loyal Jones in his 2008 book “Country Music Humorists and Comedians” recognized his place in country music history as a comedian alongside his heroes Minnie Pearl, and Jerry Clower and contemporary Jeff Foxworthy.

He shared comedy recordings on the award nominated “Appalachian Musical Revival“ in 2009 and in his 2016 “Keep ‘Em Smilin’.”