Every time I step through the doors of the Country Music Hall of Fame and Museum in Nashville, Tenn., I am struck with the immense size of the museum and all its facilities. Knowing our genre’s starting point, having such a place to remember, honor, foster and preserve, what has been accomplished is amazing.

I stood outside the Ford Theater listening to the notes of “Sally Johnson” fill the air and looked at lines on Labor Day weekend waiting to buy their ticket and it took me back to the days of seeing the lines of country music fans waiting for a show at the former Opryland amusement park.

When I was a boy, that was the center of activity when people visited Music City; one of the big annual attractions that brought people from around the world was the Grand Master Fiddler Championship, now in its 45th year, the show is held at the Country Music Hall of Fame and Museum in its Henry Ford Theater.

While as a youth, I competed; as a Grand Ole Opry guest star, I performed, today, I am the celebrity host of the Grand Master Fiddler Championship stepping in the shoes of Roy Acuff, Porter Wagoner and Grant Turner. This year I welcomed the help of Grammy winner Jim Lauderdale, journalist Craig Havighurst and from America’s Morning Show’s CMA winner Kelly Ford who assisted me with the emcee duties.

This year’s crop of fiddlers spanned fiddlers from coast to coast from early elementary school to retirement age performing tunes from “Red Wing” to “Bridget’s Waltz.” What was consistent throughout the two-day event, was the level of proficiency shared by each competitor reflected a desire to bring home the nation’s highest fiddling honor and a chance to perform on the Grand Ole Opry.

The crowd was moved with every pull of the bow sometimes bringing the cheers to a rousing pitch.

After 14 hours of competition, Grand Ole Opry stars Riders in the Sky were on hand to entertain and help crown the 2016 Grand Master Fiddler Champion Maddie Denton from Murfreesboro, Tenn. 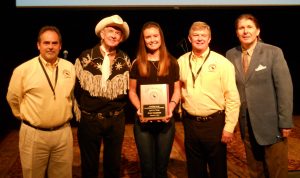 I am especially proud because Maddie won the 2016 Randall Franks Trophy at the 1890s Day Jamboree Old Time Fiddler Convention winning an opportunity to compete in the finals this year.

The organization presented the Dr. Perry Harris Award to Woody Paul of the Riders in the Sky. The Grand Master Fiddler Championship. Inc. presents the honor to individuals who have had a lasting impact on the fiddling art form. The award is named for the late Grand Master Fiddler Championship founder Perry Felton Harris, M.D., D.D.S, Colonel U.S.A.F., who convinced the Grand Ole Opry’s E.W. “Bud” Wendell that the organization needed a fiddle contest.

The Charlie Bush Award was presented to Eli Bishop honoring the traditional fiddle performance which would most reflect the tastes of former late contest volunteer and board member.

I encourage you to join us in Music City next year and enjoy the fiddling fun. The Grand Master Fiddler Championship, Inc. is a Tennessee non-profit and a U.S. IRS 501(c)(3) charitable corporation, formed to educate about and perpetuate fiddling as an art form and cultural treasure. For more info, visit www.grandmasterfiddler.com.

A fiddle and the fireplace

Mac Wiseman is the focus of new star-studded music release