In the Heat of the Night

You are here: Home1 / In the Heat of the Night 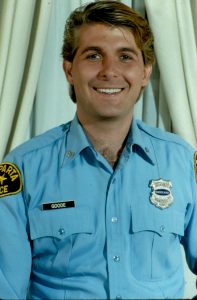 I came to Covington, Georgia with the show in August 1988 and continued working until leaving the show in 1993.  I returned to Covington to help film the TNT promo for the show “Hubba Bubba” with Alan Autry when Heat went into cable syndication in 1996.

“Officer Randy Goode” – Well, my nickname growing up and stage name in my early music career was Randy. Carroll said I looked like a Randy and thought it was a good first name. It also helped folks immediately connect with my stage name in music without special screen credits. Carroll first used it in the episode “The Creek.”  When my character was in the room, he was called “Randy” and when he was not in the room, he was referred to as “Officer Goode.”  In my character bible, my character was a cousin to “Horace Goode” who was featured in the first season of the show and a descendant of “Chester Goode” of “Gunsmoke” fame.

I was brought to the show by background casting director Dee Voight on the first day of filming. The first day as I waited outside the wardrobe trailer, someone walked by and said, ‘you look a lot like a police officer.’ I later found that to be one of the producers. Over the next few weeks, the directors continued to bring me back and they came to me and said they wanted to add another police character to the show and they wanted it to be me. I became the first Georgia actor to join the Sparta Police Department as a regular and the second Georgia actor to become a regular on the show after actor Dan Biggers, who portrayed “Doc Robb.”

After spending five years, there were countless moments that I consider special memories with some of the legends that came to be part of our show. Making friends with some of my TV heroes such as Ken Curtis of “Gunsmoke,” Claude Akins of “Sheriff Lobo,” Larry Hagman of “Dallas” and so many others. All of those are featured in my book series “Encouragers.” One of my favorite memories was standing on the square with fiddle in hand leading the crew and cast in “Happy Birthday” for Carroll O’Connor. Some of my fondest memories are the time spent with all the cast and friends as I produced the “In the Heat of the Night Christmas Time’s A Comin’ CD.” It was months of work and endless hours that we all shared to raise money for 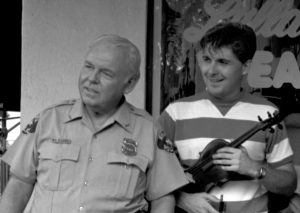 Carroll O’Connor was a tremendously good and supportive man who could be a tough boss. We called him “Pops” and he often treated me as a son in our years of association. I was honored that he shared with and taught me many aspects of the business. I was blessed to have he and his wife Nancy be part of my life. One of my favorite times is when our families shared Thanksgiving together.

We were all part of the community, so we were neighbors. Folks didn’t have to “leave us alone.” We talked on the streets, in the restaurants and the grocery stores.

Many of the cast had condos in Conyers, I stayed there, or at the White Columns in Covington. I also often commuted since my home was only 45 miles away.

It was an amazing experience to step in front of millions of people each week and share my part of the story no matter how insignificant to the storyline some may have considered it at the time. When I came to the show, I was already a country music personality after guest starring for several years for the Grand Ole Opry, so I was blessed with an audience before I came. I never imagined the effect of adding 25 million people in the U.S. and fans around the world to that existing mix. It has been a great blessing that the Lord afforded that I could have never imagined.

At different times, I found myself closer with different cast members. Sometimes the closeness came from our work together or sharing similar likes and/or dislikes. Alan Autry, David Hart and Geoffrey Thorne were close with me while we were filming. I am still in contact with all three after all these years especially thanks to social media. Carroll was close at times, as was Hugh O’Connor. There were many directors who become close friends – Peter Salim, Russ Mayberry, Vince McEveety, Leo Penn, and Larry Hagman.

The show shot its pilot season in Hammond, Louisiana and except for a couple of episodes shot in Los Angeles and one in Atlanta, Covington and its surrounding communities were the backdrop for the show. Although, there was a period we thought we would all be headed to Los Angeles for shooting when there was a discussion of moving to Los Angeles. Since that never happened, I didn’t shoot outside Georgia on the show.

Alan Autry and I remain business partners after 28 years. One of our latest projects together is the Americana CD “Mississippi Moon.” Wilbur Fitzgerald and I serve on some Georgia film industry boards together, and thanks to social media, I keep in touch with David, Geoffrey and a few of the other regulars and recurring actors from the show.

There were changes in the direction of the show. Many other cast members were making their exits or at least announced they were leaving; I knew it was the right time for me as well because “Officer Randy” was being featured less since there were even more police characters on the show. There were seven when I started, 13 when I left just in the Sparta Police Department, and the producers were preparing to add more characters to support Gillespie’s move to Sheriff from police chief. I wasn’t killed off, so there was always an opportunity to return, but I did not.

I returned to Nashville, guest starring for the Grand Ole Opry and touring full time as an entertainer and recording albums. 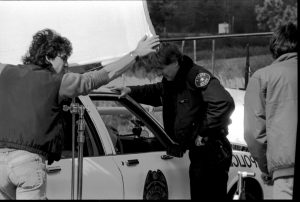 There is a saying in Hollywood, there are no small parts, just small actors. The art of being part of an ensemble cast is doing what you do to enhance the work of those around you. There are actor’s that would have given their right arms to do what I did on “In the Heat of the Night.” I was honored to be part, there are folks around the world that know “Officer Randy” and no matter what other accolades the Lord provides in my life, for many, I always will be a small town Mississippi police officer. I was a music star before I came to the show and I am blessed to still be sharing my music and acting in films. I am honored that there are people who want to see and hear me perform from around the world.

I don’t set out to, but sometimes by accident I will come across one airing while being on the road. It brings back some fond memories.

I guess my goals have not changed since I walked on the set of In the Heat of the Night. I wanted to create memorable television and movie characters that the whole family can enjoy. I want to create music that reaches the emotions of the listeners and uplifts them. I want to write words that inspire hope, encouragement and shares the gifts that God has shared with me in my life.

I was honored that Carroll coached me in many areas, acting, screenwriting, and directing. He worked with me as I began the process of understanding how a script should come together. He shared what made a good script, what established and built a character.  There was a point in the history of the show when Carroll was needing someone to become his personal scriptwriter. At the time, I could have made that transition from in front of camera and did only that but I chose not to make that change and to continue to work in front of the camera. I knew that my work on camera was what I was there to do.

I often was able to play around the set and Covington and Conyers newspapers both featured me highly in whatever I was doing in my music career – musical releases, videos and awards. I did not actually ever play any shows in the area during the show but many folks tuned in to see me appear on TNN and CMT or listen in on WSM radio when I would take off and go back to Nashville. I filmed my “Handshakes and Smiles” video, my top 20 selling Christian release, on the exterior sets pf the show in Covington, once again taking the town around the world through my music. My music fans actually created the demand for me to perform musically on In the Heat of the Night. So many fan letters came in to the networks asking me to perform, Carroll eventually wrote a special storyline to make it happen in the episode “Random’s Child.” I was honored that show fans made me one of the highest rated characters on the show at both NBC and CBS, by writing to me. According to the network press departments back then, mail addressed to or focusing on me was second only to that of Alan Autry.