It’s always a pleasure to see old friends succeed in their efforts.

One of my favorite comedians is Tim Lovelace and I have had the honor to share the stage and make thousands laugh.

He is having an amazing run with his project Living in a Coffee World. It has consistently stayed in the top 10 on Billboard’s chart for comedy albums, is currently sitting at number seven and shows no sign of slowing down.

“Tim makes the extra effort to ensure his comedy is appropriate for all ages,” said Nate Goble, StowTown Records producer and co-owner. “To be consistently in the Top 10 Billboard Comedy Album chart among such comedic greats as Jerry Seinfeld and Jim Gaffigan is fantastic. We are proud of Living in a Coffee World.”

Tim said he was excited about the success.

“I appreciate the team behind this Billboard Top 10 longevity; StowTown Records owners Wayne Haun, Ernie Haase, Landon Beene and Nate Goble, along with their incredible staff and the staff at Sony/Provident, have made this an incredible journey,” he said. “I have enjoyed taking the Coffee World Tour around the country this past year, and am hooking up my caffeine IV drip so that I can extend the tour into 2019.”

Living in a Coffee World is distributed exclusively by Sony/Provident and is available at retail and digital outlets worldwide. To learn more visit, www.TimLovelace.com.

I was privileged to attend the National Quartet Convention at the LeConte Center in Pigeon Forge, Tenn. It was an amazing opportunity to visit with the top talents of Southern Gospel music while catching many of them perform on stage.

The Southern Gospel Music Association inducted its 2018 class of Hall of Fame members at the event. They included Ann Downing, the late Tracy Stuffle of the Perrys, Mark Trammell, and the late Norman Wilson of the Primitive Quartet.  To learn more, visit https://sgma.org.

Another old friend – Country Music Hall of Famer Charlie Daniels is aiming for his latest studio album, Beau Weevils – Songs in the Key of E, set for release on Friday, October 26.

“Beau Weevils – Songs in the Key of E is the culmination of a long held desire of James Stroud and myself to do a project together,” says Daniels. “We had worked together, with James in the capacity of producer, which had resulted in some of our most successful albums for The Charlie Daniels Band, but James is one of the finest and most soulful drummers in the business and I figured we could get together, musician to musician, and come up with something special. We just needed a vehicle in the form of songs that would fit the bill.” 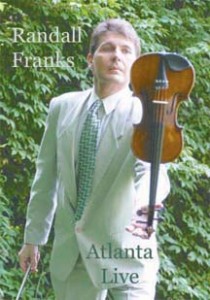 Share America Foundation DVD features Randall Franks and his band in 2008 performing You Better Get Ready, This Little Light of Mine,  In the Garden,  Leaning on the Everlasting Arms,  The Old Black Fiddle, Interview,  and Amazing Grace

To receive a copy of “Atlanta Live” DVD featuring Randall Franks and his band sharing an interview about Share America his work in television, and performing six songs, send a tax deductible gift to Share America Foundation, Inc. of at least $25 and request Atlanta Live 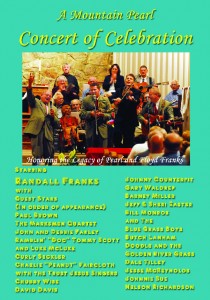 Share America Foundation, Inc. features in the 2012 release a cast of music stars and legends Starring Randall Franks with Guest Stars (In order of appearance) Paul Brown, The Marksmen Quartet, John and Debbie Farley, Ramblin’ “Doc” Tommy Scott, and Luke McLuke, Curly Seckler, Charlie “Peanut” Faircloth with the Trust Jesus Singers, Chubby Wise,  David Davis, Johnny Counterfit, Gary Waldrep, Barney Miller, Jeff & Sheri Easter, Bill Monroe and The Blue Grass Boys, Butch Lanham, Doodle and the Golden River Grass,  Dale Tilley, Jesse McReynolds, Johnnie Sue, and Nelson Richardson. Two Hours of Entertainment, 29 Musical Performances including these favorites and more:
Ain’t Gonna Study War ♫ Amazing Grace ♫ Grandpa Was A Farmer  ♫ How Great Thou Art ♫ Wayfaring Stranger ♫ Crying My Heart Out For You ♫ You Can’t Stop Time ♫ Lord, I Am Coming Home ♫ When the Saints Go Marching In ♫ Golden Slippers ♫ Farther Along ♫ The Way Is In God’s Hands ♫ The Other Side of Heaven ♫ Cripple Creek  ♫ In the Garden ♫ Swing Low, Sweet Chariot ♫ You Better Get Ready ♫ Back Up And Push ♫ When They Ring Those Golden Bells for You and Me ♫ What a Friend We Have in Jesus ♫  The Old Gospel Ship ♫ Meet Me in Heaven ♫ I Want to Go There

Two Hours of Entertainment, 29 Musical Performances featuring a host of stars raising funds for the Share America Foundation, Inc. available for a $25 donation.

“This program highlights some wonderfully talented entertainers who have been so gracious to support our efforts to encourage youth helping us raise funds for scholarships,” he said.

“Precious Memories” was filmed live from the stage of the 166 year-old Ringgold Depot in Ringgold, Ga.

“This program highlights some wonderfully talented entertainers who have been so gracious to support our efforts to encourage youth helping us raise funds for scholarships,” he said.

“Precious Memories” was filmed live from the stage of the 166 year-old Ringgold Depot in Ringgold, Ga.

“The gathering also recognizes the contributions of one of our founding directors – the late Joe Turner who made such a difference in the lives of so many youth and is also dedicated in memory of the late director Gene Lowery,” Franks said.

The DVD, produced in association with Peach Picked Productions and Tim Witt Studio of Rocky Face is a fundraiser for the Pearl and Floyd Franks Scholarship Fund. The Share America Foundation, Inc., a Georgia non-profit, presents scholarships to talented musicians who excel in the Appalachian musical arts. Share America hosts 10 fundraising concerts annually at the Ringgold Depot. 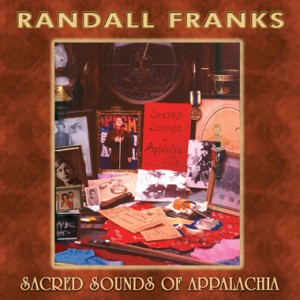 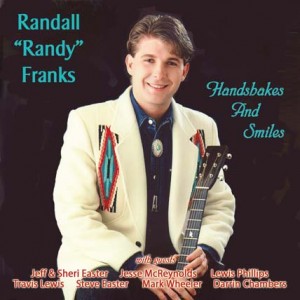 Handshakes and Smiles was a top 20 Christian music seller for Randall Franks making him the first bluegrass artist to ever reach the top of the Christian music sales charts. It features several of Randall Franks most popular radio and TV musical releases to country and gospel music including its title song – “Handshakes and Smiles,” “You Better Get Ready,” “He’s Never Gonna Fool Me Again,” “Rock of Ages,” and “Pass Me Not.” 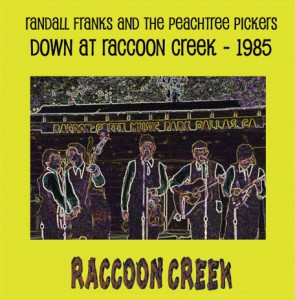 Randall Franks – Down at Raccoon Creek

Randall Franks and his Peachtree Pickers perform live “Down at Raccoon Creek” near Dallas, Ga. in 1985. 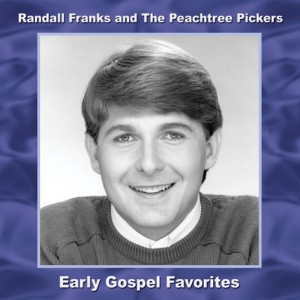 Crimson Records (2010)
Randall Franks and the Peachtree Pickers with Jeff Blalock, Jerry Coursey, Greg   Earnest, Wes Freeman, Lyndon Kolb, Randy McClung, Matthew Mundy, Mark Nelson, Max Tillman and Roy Westray.
He’ll Set Your Fields on Fire, Who Do You Think, There’s A Man in Here, God Put a Rainbow in the Sky, Back Up and Push the Devil Away, It’s Me Again Lord, Jesus Is My Best Friend, Man in the Middle, Building on Sand