News Blog
You are here: Home1 / News Blog2 / Southern Style Columns3 / The Dukes “Enos” is hopeful that good will prevail in TV

I had the opportunity to sit down recently with a long-time friend as he traveled back from a personal appearance where he visited with hundreds of fans that watched him each week on CBS.

“The Dukes of Hazzard” co-star Sonny Shroyer said he is saddened by recent events relating to his show. He saidalmost everyone came to him expressing frustration over the recent cancellation of the show on TV Land. 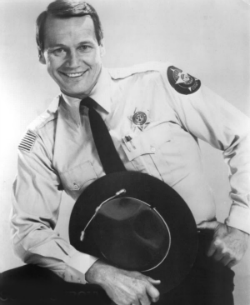 Shroyer portrayed deputy “Enos Straite” the good cop stuck between earning a living in a system corrupted by others while steering the outcomes towards good. He also portrayed the character in his own CBS series “Enos” which aired in the U.S., 30 foreign countries and on the Armed Forces Network. He scored two People’s Choice nominations.

Shroyer has also appeared in dozens of classic TV Shows spanning the 1970s through the 1990s including regular roles in “I’ll Fly Away,” “American Gothic,” and recently “Rectify.” He counts among his credits major films such as “Forrest Gump,” “Roots,” “The Rosa Parks Story,” “The Longest Yard,” and “Smokey and the Bandit.”

He said the rural-based comedy “The Dukes of Hazzard” became a legacy of work for many talented performers that continues to uplift viewers in laughter while sharing valuable lessons in life in each storyline.

“I hope that once the spasm of the knee-jerk reaction of some cable TV executives passes that the Dukes will ride again, if not on TV Land, then on some other cable network that appreciates not only the positive storylines of good’s triumph over evil intentions but characters treating others as you would want to be treated – with respect. The series also features a long list of talented stars and guest stars who each week worked their heart out to entertain a worldwide audience.”

Shroyer said if one looks at film and TV show storylines with characters reacting to a tragic situation, there are always those who wish to react swiftly.

“In the westerns, this was often portrayed by the good guy standing off a group of angry townsfolk wishing to forego a trial,” he said. “This is what has happened here I think, unfortunately, there was no man or woman in a white hat standing in the breach of this situation to defend the work of hundreds of show business artisans.

“Generations of youth have watched the show from every nationality, race, creed and religion around the world, sharing in the moral lessons between the laughs,” he said. “For decades my fellow stars from the show and I have made personal appearances meeting these youth and the adults who grew up watching us. They point to our show as one of the beacons of hope in a wasteland of television where people are more interested in self-interests than each other.

“We, the cast members of that show, have raised untold funds for charities to do their works,” he said. “That’s only possible when good is in what you do. That is what ‘The Dukes of Hazzard” was about – doing good and making people happy.”

Shroyer said while he does not know the future of the show on cable, he is hopeful he and the fans will see the General Lee rolling again with him close behind in his Hazzard police car.

“I think a good clean show will in the long run emerge as the victor,” he said. “I am sure cable broadcasters will hear from millions of viewers who agree.”